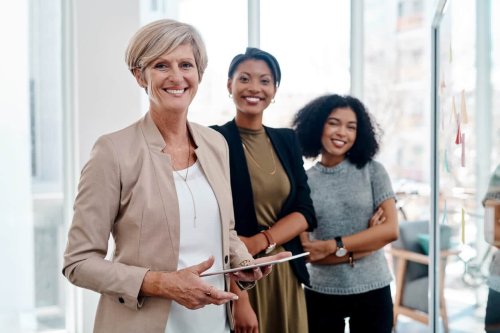 Some of these patents are backed by stories of female entrepreneurs fighting back after being rejected by big-name venture capitalists. Others have more heartbreaking origins, inventions dreamed up after near-tragedy.

Over the centuries, women have built inventions to save lives, aid personal and national security, save time, and improve accessibility for people with disabilities. The US Patent Office has issued over 10 million patents since 1790—here are 10 fascinating ones held by women.

One of the most recognizable names on this list, Hedy Lamarr is most well-known as an actress during the golden age of Hollywood. She appeared in the films Boom Town (opposite Clark Gable) and Tortilla Flat (with Spencer Tracy) and gave an Oscar-nominated performance in Samson and Delilah in the 1940s. However, she’s less well-known for her contribution to technology during World War II. Lamarr and composer George Antheil received a patent in 1942 for a “Secret Communications Device”: a device designed to allow communications to ‘hop’ from one frequency to another. What started out as a way to protect Allied communications from Nazi interception became the foundation of modern-day secure Wi-Fi, GPS, and Bluetooth technology.

Next time you’re in an airplane and use the call button to reach a flight attendant, take a moment to thank Miriam Benjamin. In 1888, Benjamin received a patent for her “Gong and Signal Chair.” Benjamin’s chair was designed to allow hotel guests dining in a restaurant to call their waiter over without snapping, calling, or clapping. Instead, guests could push a button on the chair, sending a buzz to the wait station and illuminating a light on the chair to alert the staff to which guest needed attention. It was adopted by the US House of Representatives to summon pages before becoming the precursor to the call systems we use today.

The first African-American woman to be granted a patent, Sarah E. Goode invented the cabinet or ‘Murphy’ bed. When you picture a cramped big-city apartment from your favorite movie, how many of us picture a bed that folds down from the wall, often in a shower of dust? Goode was granted a patent for this style of cabinet bed in 1885 after she saw how larger families were struggling to fit into the tiny Chicago apartments they could afford after the Civil War. When Goode’s cabinet bed wasn’t being used for sleeping, it could be used in its folded state as a roll-top desk, with compartments for holding stationery and other items.

Stephanie Kwolek is one of only 4 women to have been inducted into the Inventor’s Hall of Fame for her work on the creation of Kevlar. Working for DuPont in the 1960s, Kwolek discovered a polymer solution that could be spun directly onto fibers, creating a lightweight, incredibly strong material. Kevlar is used to protect military and police personnel as well as long-distance underwater fiber optic cables, in construction, for protective gear for athletes, and in countless other applications.

After feeling unsafe in her Queens, New York, neighborhood, Marie Van Brittan Brown—a nurse—worked with her electrician husband to invent a home security system. Her patent for what’s become the basis of today’s home security systems involved peepholes, a camera, monitors to allow viewing of the person at the door from other parts of the home, and a 2-way communication system. Her patent, filed in 1966, has been referenced in 13 other patent applications, 1 as recently as 2013.

In 1988, Dr. Patricia Bath became the first African-American woman to receive a patent for a medical purpose for her invention of the Laserphaco Probe. Seeking to create a device to aid in the prevention and treatment of cataracts, Dr. Bath studied laser technology in Berlin before inventing a device that allowed for the precise removal of cataracts. Her invention is still used today and has led to the restoration of eyesight for people worldwide. Dr. Bath also pioneered the creation of community ophthalmology, a discipline that seeks to help underserved communities receive preventative eyecare.

Today, windshield wipers are standard operating equipment on any vehicle. But in the early 1900s, when automobiles were first gaining popularity, no effective windshield wiper existed. After observing how trolley car drivers would need to stop to wipe the snow off their windshields or drive with the windows open, Mary Anderson invented what became the precursor to our modern-day windshield wipers. She received the patent in 1903—and by 1922, Cadillac made her wipers standard issue on every vehicle.

Blind since the age of 14, Chieko Asakawa patented the Home Page Reader (HPR): the first practical voice browser to allow blind and visually impaired people to navigate websites using their numeric keypad instead of a mouse. Asakawa’s inventions have improved accessibility worldwide since she received her first patent for HPR in 1997: she currently holds 20 patents for various accessibility technologies.

If you have an automatic dishwasher in your home, you can thank Josephine Garis Cochran. Cochran received a patent for her dishwasher in 1886, and her idea to use water pressure to clean dishes instead of scrubbers set her invention apart from others of her time. Her invention was showcased at the World Columbian Exposition of 1893, where it gained traction with hotels and restaurants. Once hot water became more readily available in residential areas, her dishwasher started gaining popularity in homes as well.

While not much is known about Mary Dixon Kies, no list of innovating women patent holders would be complete without her. Kies was the first woman to apply for and receive a patent in her own name in the US on May 5, 1809. Her patent for weaving silk and straw together was praised by Dolly Madison, President James Madison’s wife, for improving New England’s economic situation after the War of 1812 and was widely used throughout the textile industry for decades. Prior to 1840, there were only 20 patents issued to women, Kies being one of them.

The number of women applying for—and receiving—patents is on the rise in the United States, with women in business leading the charge in innovation and developing new technology. Let’s hope the trend continues in both the near and distant future.