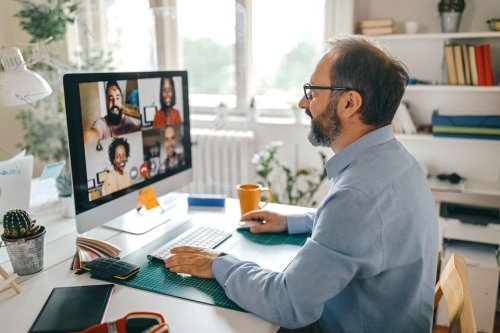 Does It Matter What You Look Like on Zoom?

Let’s start with this: we’re in the middle of a pandemic. We’re experiencing collective trauma. According to one study, more people are experiencing PTSD symptoms during the pandemic. So whatever you’re doing to get by is great. Now is definitely not the time to implement forced dress codes or give employees feedback that they should “stop wearing sweatpants.”

That said, a whole host of studies illustrate that the way we present ourselves can have a demonstrable effect on the way people see us—and work is no exception. For example, a 2015 study published in Social Psychological and Personality Science found that dressing up helped participants maintain focus. If you’re having a hard time concentrating in Zoom meetings, then donning more formal attire may increase your concentration and engagement.

The same study found that dressing more formally aided in abstract, big picture thinking. With economic and public health realities fluctuating on a weekly—if not daily—basis, that’s increasingly difficult to do. So pulling out your “night on the town” or “big meeting” duds may help you get into the right frame of mind, whether or not you’re on a video meeting.

Dressing more formally can also make you feel more confident, a 2006 study showed. If working from home has you feeling “off your game,” then a blazer might go a long way toward making you more confident in your team meetings. This practice may be especially helpful if your living space doesn’t allow for dedicated office space or if you’re prone to have pets or kids who interrupt your calls. In those instances, formal attire can convey a “See, I still have it together despite the chaos around me” vibe. That’s a mood we could all use telegraphed more right now, even if we’re not feeling it.

How could that translate to Zoom? If your coworkers are rocking it super casual from their sofas, then rolling in with a put-together formal look and styled hair may give the impression that you’re not just holding it together, you’re killing it. If, on the other hand, everyone else has committed to business casual Zoom meetings, showing up with your hair thrown in a top knot and rocking a college sweatshirt may convey, “I’m too busy working to care about what I look like. Excuse me while I innovate.”

There are not yet any studies specifically regarding the way your appearance affects how you’re perceived on video calls, so it’s going to be a while before we know whether or not you need to wear formal pants to reap the full benefits of dressing formally on Zoom. In general though, these rules work as long as they help focus your energy. If wearing dress pants is going to distract you, don’t do it! No one can see you anyway.

These studies should be used to help you feel better, stronger, and more focused in meetings. They shouldn’t be used to make anyone feel bad for the way they’re coping—especially if their work hasn’t been affected. You don’t have to go full suit-and-tie, either. If you haven’t been brushing your hair before a video meeting, maybe start there? But again, no pressure. We’re in a pandemic.