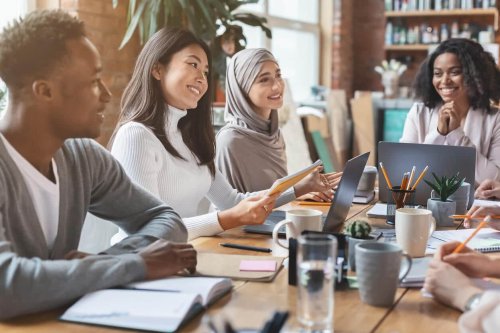 Over the past decade, a stereotype of entrepreneurs has formed: they’re mostly young people, free of the burdens of kids and mortgages, who live in San Francisco and work 80-hour weeks. They wear T-shirts to work, ride around on scooters, and always seem to have their AirPods resting in their ears.

While there is some truth to this picture—YouTube has slides and nap pods in its offices, while some executives take on job titles like Chief Troublemaker or Innovation Sherpa—the reality is that the entrepreneur field is incredibly diverse. Starting a business isn’t just a young person’s game.

Get to know the real face of entrepreneurship and the people behind small business success.

The Average Age of Entrepreneurs Is 40–45

First, let’s bust the myth that entrepreneurs come up with their best ideas in college or start their companies immediately after they graduate. While young people can be incredibly innovative, studies show the average entrepreneur is 40 years old when they launch their first startup. This jumps to 45 years old for high-growth startups.

Older workers have more experience. They’ve filed taxes on their own and navigated healthcare signups. They understand how to run a business and have learned many valuable lessons that help them when launching and running a new venture.

Furthermore, the average 45-year-old likely has more disposable income than someone right out of college who’s often trying to pay off student loans and doesn’t yet own a house. This limits how much money can be spent on establishing a business.

Entrepreneurship doesn’t have an age limit. You’re never too old—or young—to start your own business.

Minority Business Owners Account for Half of New Businesses

It’s also time to dispel the myth that today’s entrepreneurs are mostly white and privileged. More minority businesspeople are starting their own businesses within their communities and meeting customer demand where major brands aren’t.

According to the US Senate Committee on Small Business Entrepreneurship, minority business owners account for more than 50% of the 2 million new businesses founded in America over the past 10 years. These business owners have created more than 4.7 million jobs and have annual sales accounting for $700 billion.

Further, the lack of federal support has ripple effects across predominantly BIPOC communities. When businesses can’t get the funding they need, they have to let their employees go, reducing overall buying power in the area and hurting other entrepreneurs who rely on those paying customers. BIPOC business owners need to work harder to survive the pandemic and will likely take longer to reach pre-pandemic sales levels.

40% of American Businesses Are Women-Owned

Women also continuously prove that they are just as successful as men when starting their own businesses. Remember: starting a business is just the first part. Entrepreneurs also need to keep their doors open, pay off their loans or investors, and grow successfully throughout the years. Research shows that women may be better off starting businesses because they are more effective leaders and communicators.

It’s interesting to compare the differences between male and female entrepreneurs. In a study of 350 startups, researchers found that women-owned businesses were safer for investors. More women owned only 1 company, rather than becoming serial entrepreneurs, and focused on making that single brand a success.

However, women generally faced more scrutiny for their funding requests than their male counterparts and had a harder time on average securing the funds they needed.

The rise in female entrepreneurship is impressive, especially considering most women couldn’t fathom owning their own business until roughly 50 years ago. The US Census Bureau mentioned female business owners for the first time in 1972.

Remember, it wasn’t until 1974 that a woman could take out a credit card without her husband’s permission, much less secure a loan for a new store or be treated as an equal in the workplace—something that most women are still working toward.

It can be fun to think about entrepreneurs sitting on beanbag chairs as they develop the next viral app, but the entrepreneurial reality is much different. Most entrepreneurs care about lumbar support for their aging backs or balancing family obligations with their dreams of starting their own companies. Entrepreneurs come from all kinds of backgrounds—both privileged and not—and most have experience in multiple fields.

Anyone can be an entrepreneur as long as they have the drive to work hard, the desire to learn, and the passion to follow their goals.