Bar Is Holding Out for a Miracle,  Despite PPP Help

Wendy Harris describes her bar Crafty Beer, Wine, Spirits as the Cheers of the area. With 16 craft beers on tap, a curated wine list and a friendly staff that has loyal regulars sipping on brewskis while chatting with friends, it has been her livelihood for the past seven years.

But when COVID-19 reared its ugly head across the nation, Crafty, like other businesses, had to close up shop on March 17.

“We knew things were getting bad, but none of us expected a complete shutdown that fast,” says Wendy. “This is my livelihood, what am I going to do?” she recalls thinking.

Yet, Wendy remained optimistic that the government would provide financial assistance, otherwise businesses like hers would not make it. But things quickly went awry.

Trying to survive during unprecedented times

Despite having to close down the bar, Wendy was able to keep Crafty’s retail shop, full of an impressive selection of artisanal beers from far and near, along with wine and cigars, open, as it was considered essential.

It helped, but with the majority of her business coming from bar sales, it wasn’t enough to survive.

She remained hopeful, though, as Wendy, along with other food/alcohol establishment owners, thought the governor was going to ease restrictions on restaurants and bars, allowing them to re-open at 50% capacity during the phase two rollout, starting on May 22.

But things took a turn for the worse.

During a press conference on May 20, the governor announced restaurants along with wineries, distilleries and breweries could open their doors, but left bars and nightclubs out in the cold.

“I was devastated,” Wendy said, noting that he also extended phase two from the anticipated three-week time period to five weeks, meaning, bars like hers would be closed even longer than expected. (A bar association filed a lawsuit against the governor.)

PPP is a start but there needs to be more

Wendy had already applied for and received the Payment Protection Plan, or PPP, when she heard the news. Initially, she had gone through Wells Fargo, her bank, but couldn’t get an answer from the financial institution. Worried that the PPP money was going to run out, she decided to look elsewhere.

She turned to Lendio, and while the process took some time to get everything lined up, her contact’s ongoing communication – texting during weekends and jumping on the phone — along with receiving email updates, helped her stay confident the money would hit her bank. When it finally did, she felt a sense of relief.

“Honestly, they saved me,” she said. “No way would I have been able to pay my people without it.”

Her employees have helped her keep her business up and running and allowed Wendy to keep them working as much as possible.

“Thank the lord for Lendio,” she says, “Otherwise, it would have been a much, much worse situation for me without their help.”

While she is grateful for the funds and the fact they will be forgiven, she thinks the government needs to do more, especially if the U.S. sees another spike this summer or fall. (North Carolina is already seeing another surge in COVID-19 cases)

“I feel like it is going to get a whole lot worse,” she says about the virus. “All I can do is look one to five days out, because if I look further than that out, it seems very hopeless to keep a business running, unless things change.”

She wants the government to offer more grants for businesses and loans should be forgiven, along with taking a different approach by examining the impact on an industry-by-industry basis, as some, like restaurants and bars, have taken more of a hit.

But in the meantime, she can’t wait. She has decided to wade into the gray area of the North Carolina guidelines and open up her bar, going against the governor’s orders.

Wendy wants to go back to the days of Cheers … but safely. Crafty is now open and following the same guidelines as restaurants.

“I feel that the executive order allows me to open, meaning the intent to keep people safe while allowing businesses to be in operation; I feel like mine qualifies for that,” she says. “Now would the governor agree with me if he heard about opening, probably not.”

Crafty is following the same health guidelines as restaurants, including practicing social distancing, operating at limited capacity, wearing masks, having signs in place and hand sanitizers in the vicinity.

“I am a 100% in support of keeping people safe. I am a high-risk person myself,” she says. “I have to be very careful, but I also know that we need our livelihood.”

She is hoping with some additional help from the government, Crafty can once again be the Cheers of her community.

“Everybody knows everyone. People come every day because this is where they get their social interaction, she says. “Life is stressful, even aside from everything going on, and it is a nice place to come and relax.” 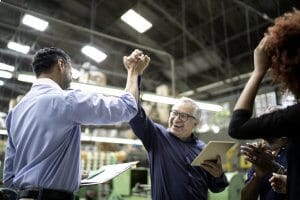